skip to main | skip to sidebar

How Day Star First Nation came to be

This is an historical piece I wrote for my monthly column in Eagle Feather News. I used to be a sessional at First Nations University of Canada. I taught Cree history and culture. It was fun but I have too much on the go to keep teaching besides I prefer research. Day Star is my wife's direct anscestor. He had seven daughters and no sons and so the Day Star family name
is no longer found on the reserve that bears his name. Strangely enough my wife and I were blessed with daughters but no sons.

On the north end of Daystar First Nation there is a high hill which is the highest point of land between Riding Mountain National Park and the Cypress Hills. It is an old landmark that can be seen for many miles from the plains to the west and across the Quill Lakes to the north. The area is a part of the Touchwood Hills, an old wintering ground of the buffalo and the people who hunted them. The high hill remains to this day an isolated and mystical place.
The story centers around Chief Daystar who in 1874 signed Treaty Number Four and took his reserve on the land shown to him in a vision, a dream or both. Chief Daystar began as a councillor in the camp of Chief Piapot. His people traveled far out onto the western plains unto the border of Blackfoot country and as far south as the Upper Missouri River in what is now central Montana.
In his younger days Daystar was attacked by a buffalo which hooked his belt upon its horn and tossed him violently about. His people killed the enraged buffalo sparing Daystar’s life. A badly shaken Daystar noticed much to his surprise and to those with him that he was not hurt in the least.
Two men from his Band were crossing the flat plains to the west of what is now Moose Jaw Saskatchewan. They were returning from the Bear Paw Mountains to their people camped on the South Saskatchewan River. The wind picked up and they witnessed a thunderstorm moving toward them from the west. They didn’t have time to escape so they lay down in a buffalo wallow and prepared to wait out the approaching storm. The storm came with a the crashing of thunder and the shaking of the earth. The rain fell in torrents. Through the curtain of rain the men witnessed a strange sight. They saw the outline of an enormous bird lifting a giant wriggling snake in its talons. The great thunderbird struggled to lift the snake. Higher up into rain they went until they vanished in the storm.
In the winter of 1869/ 1870 a grieving Cree warrior went from winter camp to winter camp crying for war against their enemies to the west, the powerful Blackfoot Confederacy. He collected eleven pipe stems belonging to the war Chiefs of eleven Bands. Among these bands, committed to a collective raid upon their enemies, was Chief Piapot. They gathered at the elbow of the South Saskatchewan River and moved west into the no man’s land north of the Cypress Hills. It was at this time Chief Piapot was given a prophetic dream. He saw them fighting an enraged buffalo bull and no matter how many bullets they shot into it they could not stop it from tearing them to pieces. He shared this dream with the people and told them he interpreted the dream to mean only disaster lay ahead and so he was turning back. The one who had cried for war called Chief Piapot a coward and a child afraid of his dreams. This man could only see revenge for he had lost his brother in the fighting a year before. His way of grieving was to lose himself on the path of rage.
Among those who turned back with Piapot was Daystar. In the Spring of 1870 over three hundred Cree and Assiniboine died in the Battle of the Iron Buffalo. Among the dead was he who cried for war. Seven survived, all were wounded. Among them was Little Pine’s War Chief Masatimwas my paternal great grandfather. It is said the Old Man River ran red with Cree blood that day. The battle site is below the University of Lethbridge in southern Alberta.
Daystar was also given a prophetic dream. He left his body and traveled in the sky to the highest hill in the Touchwoods. He was shown the land that was to become Daystar First Nation. He landed upon the hill and a voice said. “Daystar this where you will raise your grandchildren.” He was a Chief in his own right when camped at the elbow of the south Saskatchewan River he received word it was time to make Treaty Number Four at Fort Qu’Appelle. Daystar followed his dream and selected his land as the spirit had told him. Piapot, a true Plains Indian laughed at Daystar for choosing to raise his children in the trees.
This is how Daystar First Nation came to be. Even to this day the reserve begins where the trees begin. The northern half is rolling hills with birch and poplar stands, meadows and small lakes. This corner remains much as Daystar would have remembered it and so his people keep it.
Posted by John C at 9:15 PM

I call these hills my home and hunt them every year and Daystar is my great great grandfather. Found an old buffalo skull buried along a pond near the hill....left it where i found it. Can't wait to go back to the hills where the owl hangs. 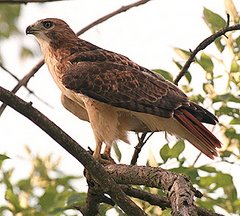 Welcome to the suburban reserve

I work in the city and live in the country. I grew up in small towns close to Indian reserves. My wife is very reserved. Neither of us wanted the city life and like the plot of the old tv series "Green Acres" we chose to devolve back to the country life. It's a good acomodation. We have the land but none of the politics of a reserve. There's a pair of red tail hawks who spend their summers back in the bush some distance from our place. They often wheel and cry overhead. In Cree red tail hawks are called sakwatamo. I've heard they are called the keepers of sacred places. They embody a spirit I deeply admire and so I call my blog 'Prairie Hawk".